bp and Ørsted to create renewable hydrogen partnership in Germany

bp and Ørsted have today signed a Letter of Intent (LOI) to work together to develop a ‎project for industrial-scale production of green hydrogen – a significant step in developing ‎bp’s hydrogen business. Green hydrogen is made by the electrolysis of water using ‎renewable power, producing zero emissions.

Hamburg/Lingen, 10. November 2020 – In their proposed Lingen Green Hydrogen project, the two firms intend to build an initial 50 ‎megawatt (MW) electrolyser and associated infrastructure at bp’s Lingen Refinery in north-‎west Germany. This will be powered by renewable energy generated by an Ørsted offshore ‎wind farm in the North Sea and the hydrogen produced will be used in the refinery.‎

Under their LOI, bp and Ørsted will now work together to further define the project, agree ‎definitive documents and plan to make a final investment decision (FID) early 2022, subject ‎to appropriate enabling policies being in place. The companies anticipate the project could be ‎operational by 2024.

Electrolysis splits water into hydrogen and oxygen gases. When powered by renewable ‎energy, this produces ‘green’ hydrogen, without generating direct carbon emissions. ‎Hydrogen is widely used in refinery processes where – as in Lingen – it is now typically ‎produced by reforming natural gas, which does result in CO2 emissions. This is also known ‎as ‘grey’ hydrogen.‎

The 50 MW electrolyser project is expected to produce one tonne an hour of green ‎hydrogen or almost 9,000 tonnes a year. This would be sufficient to replace around 20% of ‎the refinery’s current grey hydrogen consumption, avoiding around 80,000 tonnes of CO2 ‎equivalent emissions a year – equivalent to the emissions from around 45,000 cars in ‎Germany.

Dev Sanyal, bp’s executive vice president for gas and low carbon, said: “Hydrogen will have ‎an increasing role to play in meeting the energy demands of a decarbonizing world. And we ‎are determined to build a leading position in this emerging industry. Bringing together Ørsted ‎and bp, Lingen Green Hydrogen offers the opportunity both to accelerate significant ‎emissions reduction in our refinery and build experience of large-scale green hydrogen ‎production and deployment. This has the potential to play an important role in the ‎development of a hydrogen economy, in Germany and beyond.”‎

Martin Neubert, executive vice president and CEO of offshore wind for Ørsted, added: ‎‎“Heavy industries such as refineries use large quantities of hydrogen in their manufacturing ‎processes. They will continue to need hydrogen, but replacing the current fossil-based ‎hydrogen with hydrogen produced from renewable energy can help these industries ‎dramatically lower their CO2 footprint. But first, renewable hydrogen has to become cost ‎competitive with fossil-based hydrogen, and for that we need projects such as this with bp’s ‎Lingen refinery which will demonstrate the electrolyser technology at large scale and ‎showcase real-life application of hydrogen based on offshore wind.”‎

In the coming decades, hydrogen is expected to play a critical role in decarbonising the ‎power, industry and transport sectors, especially those that are hard-to-electrify or ‎expensive-to-electrify. The development of businesses in emerging technologies such as ‎hydrogen and carbon capture use and storage (CCUS) is an integral part of bp's strategy of ‎transforming to an integrated energy company.‎

“Renewable hydrogen has to become cost ‎competitive with fossil-based hydrogen, and for that we need projects such as this with bp’s ‎Lingen refinery.” — Martin Neubert, executive vice president and CEO of offshore wind, Ørsted

In addition to green hydrogen production, bp and Ørsted intend to focus on maximising the ‎efficiency of the project’s electrolysis system, including assessing sustainable uses for the ‎main by-products of the process, primarily oxygen and low-grade excess heat.‎

The project is also intended to support a longer-term ambition to build more than 500MW of ‎renewable-powered electrolysis capacity at Lingen. This could provide green hydrogen to ‎both meet all the refinery’s hydrogen demand and provide feedstock for potential future ‎synthetic fuel production.

bp and Ørsted have together applied for funding for the Lingen Green Hydrogen project from ‎the EU Innovation Fund – one of the largest funding programmes for innovative low carbon ‎technologies, focusing particularly on energy intensive industries.

bp’s purpose is to reimagine energy for people and our planet. It has set out an ambition to ‎be a net ‎zero company by 2050, or sooner, and help the world get to net zero, and recently ‎announced its ‎strategy for delivering on that ambition. For more information visit bp.com

The Ørsted vision is a world that runs entirely on green energy. Ørsted develops, ‎constructs and operates offshore and onshore wind farms, solar farms, energy storage ‎facilities,‎ and bioenergy plants, and provides energy products to its customers. Ørsted ranks #1 in ‎Corporate Knights' 2020 index of the Global 100 most sustainable corporations in the ‎worldand is recognized on the CDP Climate Change A List as a global leader on climate action. ‎Headquartered in Denmark, Ørsted employs 6,120 people. Ørsted's shares are listed on Nasdaq Copenhagen (Orsted). In 2019, the group's revenue was DKK 67.8 billion (EUR 9.1 ‎billion).‎ 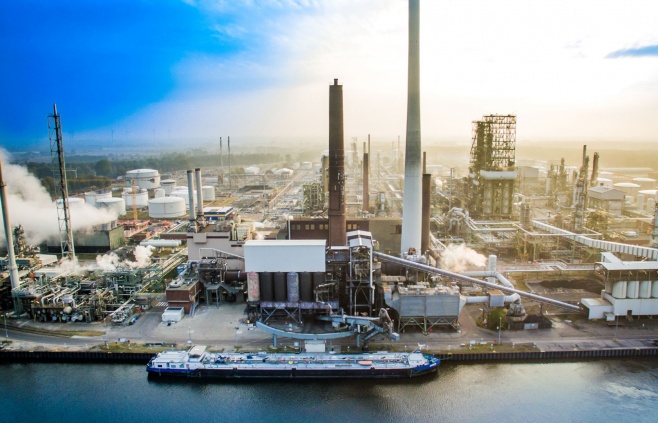