Hydrogen is key to a successful energy transition going forward. Electricity generated from renewables is converted into green hydrogen, an energy carrier and feedstock that could help to significantly reduce CO2 emissions well beyond the electricity sector. Green hydrogen represents a decisive step towards climate neutrality for the transport sector and energy-intensive industries such as refineries, steel and chemicals. It also opens up the possibility of transporting and storing large amounts of renewable energy, for example in existing salt cavern storage facilities.

Initial steps towards a functioning dedicated hydrogen infrastructure have already been taken. The GET H2 initiative is an open cross-sector consortium, driven among others by RWE Generation, Nowega, OGE, Gascade, BP, BASF, Stadtwerke Lingen, Hydrogenious Technologies as well as research centres like Forschungszentrum Jülich and the Institute for Climate Protection, Energy and Mobility (IKEM). A dedicated hydrogen infrastructure in the regulated sector can link up the energy, industry and potentially the transport and heating sectors along the entire value chain. The partners of the GET H2 Nukleus project are planning to implement the first 135 kilometres of the Germany-wide hydrogen infrastructure, from Lingen to Geselnkirchen. The key elements are the construction of a 100 MW electrolyser plant that converts renewable electricity into green hydrogen, the transport of green hydrogen in existing repurposed natural gas pipelines and use in refineries and later also in other sectors. BP, Evonik, Nowega, OGE and RWE Generation have signed a letter of intent regarding the development of the GET H2 Nukleus project. All companies are members of the GET H2 initiative. The companies aim to have the regulated grid and an electrolyser in operation by the end of 2023. This will help bring about a future with less CO2.

Besides implementing a public hydrogen infrastructure, the specific aim of the project is thus to bring the electrolysis technology to series production through large-scale deployment and thus reduce the cost of producing green hydrogen. Based on the existing natural gas pipeline network, the GET H2 Nukleus project has the potential to green light a regulated hydrogen infrastructure in Germany, starting in Lower Saxony and North Rhine-Westphalia. This in turn could provide crucial impetus for a hydrogen infrastructure throughout Europe. A prerequisite for the execution of the project is its economic viability. This calls for changes in the regulatory framework to promote the use of green hydrogen.

The principle of converting green electricity to hydrogen

Potential further applications and elements of the GET H2 Nukleus 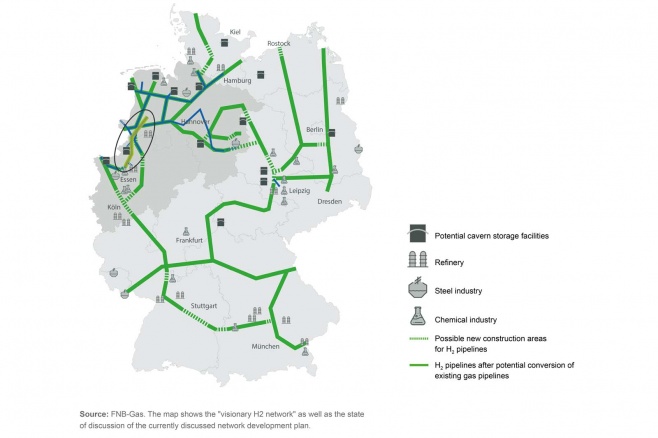